High Tatras are among the best natural parks in Europe 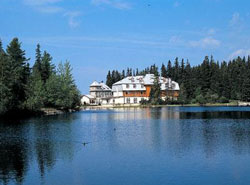 High Tatras is the largest and most popular national park in Slovakia. It was mentioned by the British publication The Ecologist Environment in the list of top 10 national parks in Europe. High Tatras were in the same list with the famous natural parks in Switzerland, Sweden, France and Greece.

High Tatras were chosen by The Ecologist not by chance. This park is one of the few in Europe, which managed to retain unique population of rare species, which in most European countries are almost completely disappeared. Brown bears, marmots, rare bird species and almost completely disappeared in wildlife antelope species - all of them can be watched in their natural habitat in the mountain forests of the High Tatras.

In addition to the rich fauna, the High Tatras are now among the top 10 national parks in Europe also due to its landscapes: Alpine lake Strbske Pleso, the highest point of the Tatras - Gerlachovsky Stit and the symbol of Slovakia- KriváÅˆ peak.

High Tatras are not only a reserve, but also the largest ski area in Eastern Europe. On the territory of the mountain massif are located such well-known ski resorts in Slovakia as Tatranska Lomnica, Smokovec and Strbske Pleso. The reserve has even its own international airport, located in the capital of the High Tatras - Poprad.

The Ecologist was first published in 1970. Since this time it is considered as a platform of the European environmentalists. Since 2009 the magazine is published only on the Internet. The main theme of his current publications is protection of the tropical forests.