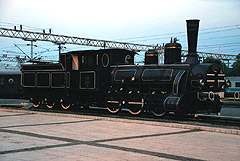 One of the units of the Slovak railway operator Zeleznicna spolocnost can be purchased by the Russian Railways, according to expert.ru with reference to Itar-Tass news agency. In the area of interest of Russian Railways is Zeleznica Spolecnost Cargo Slovakia, which is engaged in the carriage of goods along the Slovak Railways. The idea of buying railway-carrier from Slovakia was announced by the vice-president of the Russian Railways Salman Babayev.

The acquisition of the two transport companies will allow Russian Railways to secure control over the goods transit flows in key European destinations.

Today Russia and Slovakia have strong ties in the field of railway transportation and railway-infrastructure optimization. Thus, Tikhvin rail car building plant and the Slovak company "Tatravagonka" together develop new types of wagons for the Russian Railways.

In addition, in April 2011 it became known that the Russian Railways launches major investment project on building a broad-gauge part of the railway from Kosice to Bratislava and then to the Austrian capital Vienna. In this case Russian Railways will be able to reduce travel time of freight trains in Central Europe through the unification of gauge standards and avoiding the need to change the width of the wheels when crossing EU borders. Currently, the difference between European and Russian gauge is 89 mm.