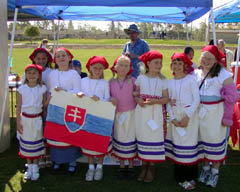 A lot of celebreties came from Slovakia, who in different time became famous practically in all spheres of human activity: from politics and science till arts and sports. Many of them became famous in other countries but their ancestors were from Slovakia.

Andy Warhol is the most popular of all. He is the father of pop-art and one of the most famous artists of the 20th century. He was born in Petersburg but he is a son of the Slovakian emigrants. His parents came to the USA from a small village Medzilabortse on the north-east of Slovakia.

The other Slovak who is often considered to be a Czech is Alexander Dubcek who was the the initiator of the reforms in Czechoslovakia and one of the heroes of “the Prague Spring” of 1968. His idea “to create socialism with a human face” was understood in the former USSR as a threat to the regime and the attempt of the Czechs to find their own way of development came to an end tragically. In August 1968 the troops of the Warsaw Block came into Czechoslovakia and the hopes of the Czechs to get freedom were buried for 20 years. In 1989 Dubcek returned into politics but that time he was one of the participants of “the velvet revolution” which led Czechoslovakia to the final independence.

Slovakia is the country where hockey is very popular. That is why hockey-players are also popular in the country. The national pride of Slovakia is Sigmund Palfy who plays for the national team and “Los-Angeles Kings” club. He is the world champion and the silver price winner of the world hockey championship in the national team. He is considered to be one of the best players of the NHL. He took part in “All Stars” games three times.

There are a lot of celebreties in Slovakia who are more known in their own country than out of it. For example the middle aged sculptor Paul from Levoca is the author of lots of unique works in Gothic style. His best work is the Alter in St.Jacob’s cathedral in his native place Levoca. The other outstanding people of Slovakia are the artists Ludovit Fulla and Dominique Skutetsky, the photographer Karol Kallai and the opera singer Lutsia Popp.